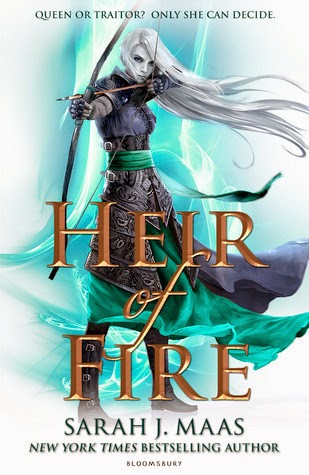 Heir Of Fire is the third book in the Throne Of Glass series.

Queen or traitor? Only she can decide.


Lost and broken, Celaena Sardothien’s only thought is to avenge the savage death of her dearest friend: as the King of Adarlan’s Assassin, she is bound to serve this tyrant, but he will pay for what he did. Any hope Celaena has of destroying the king lies in answers to be found in Wendlyn. Sacrificing his future, Chaol, the Captain of the King’s Guard, has sent Celaena there to protect her, but her darkest demons lay in that same place. If she can overcome them, she will be Adarlan’s biggest threat – and his own toughest enemy.

While Celaena learns of her true destiny, and the eyes of Erilea are on Wendlyn, a brutal and beastly force is preparing to take to the skies. Will Celaena find the strength not only to win her own battles, but to fight a war that could pit her loyalties to her own people against those she has grown to love?

I absolutely loved reading Heir Of Fire by Sarah J. Maas, which I received for review from Bloomsbury via Netgalley! Although Heir Of Fire is written from quite a few different perspectives, it flows really well. I especially enjoyed reading the chapters from Manon Blackbeak's perspective!
In this book, we are introduced to a lot of new, fascinating creatures, my favourites have to be the Wyverns and the faeries. Even though they were only mentioned in passing, I liked the faeries as they helped to showcase Celaena's journey and her future as well. I liked reading about the Wyverns not only because they added more depth to the witches' characters, but also because the Wyverns themselves are so different than anything I have ever read about before!
Heir Of Fire focuses more on magic, (and the lack of it in Adarlan), than the previous two books. The reader learns about magic with Celaena, as she learns to control and harness her power. I really enjoyed reading the different types of power and the ways they could each be used. My favourite had to be Celaena's. I loved how her magic reflected both her fiery personality, and her previous fighting style.
Despite the cover of Heir Of Fire by Sarah J. Maas being inkeeping with the story within, it didn't seem to perfectly depict the main character Celaena throughout, as both Aelin and Celaena, but instead just as Celaena. Overall, I would definitely recommend reading Heir Of Fire by Sarah J. Maas.