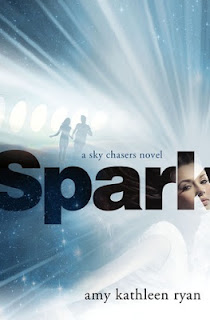 Spark is the second book in the Sky Chasers series.

Waverly and Kieran are finally reunited on the Empyrean. Kieran has led the boys safely up to this point, and now that the girls are back, their mission seems slightly less impossible: to chase down the New Horizon, and save their parents from the enemy ship. But nothing is truly as it seems…Kieran’s leadership methods have raised Seth’s hackles - and Waverly’s suspicions. Is this really her fiancé? The handsome, loving boy she was torn from just a short time before? More and more, she finds her thoughts aligned with Seth’s. But if Seth is Kieran’s Enemy No. 1, what does that make her?

In one night, a strange explosion rocks the Empyrean - shooting them off course and delaying their pursuit of the New Horizon - and Seth is mysteriously released from the brig. Seth is the most obvious suspect for the explosion, and Waverly the most obvious suspect for releasing him. As the tension reaches a boiling point, will Seth be able to find the true culprit before Kieran locks them both away - or worse? Will Waverly follow her heart, even if it puts lives at risk? With the balance of power precarious and the clock ticking, every decision counts… every step brings them closer to a new beginning, or a sudden end...

I received an ARC copy of Spark by Amy Kathleen Ryan for review from St Martin’s Press. Although I really enjoyed reading Spark, it just didn’t compare at all to the previous book in the series, Glow. There was plenty of action within Spark, but it just didn’t have the energy and sentiment of the previous book in the series. I felt that for the first half of Spark, it was just revisiting what had happened at the end of Glow and the consequences that followed. I didn’t really have a favourite character, as despite there being quite a lot of action in Spark, there wasn’t a lot of description, meaning that I didn’t really connect as much with the characters as I had with the previously. I’m not really a fan of the cover of Spark. I would have preferred a more vibrant cover to match Glow.