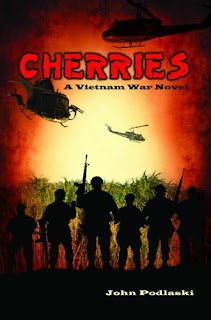 
1. What is your name and where do you call home?
My name is John Podlaski.  My family and I reside in Sterling Heights, Michigan- USA

2. What is the name of your most recent book and if you had to sum it up in 20 or less words, what would you say?
My book is called, "Cherries - A Vietnam War Novel".  Young soldiers are "different" or "changed" when returning home after their first war.  Cherries will show you why.

3. What or who inspired you to start writing? And how long have you been writing?
Actually, my wife can take the credit.  Thirty years ago, my mother gifted us with a shoe box containing every letter I had written home while serving in the Vietnam War.  We read through the many letters and a personal diary I carried - my wife, intrigued by it all, had a hundred questions.  She suggested that I make a short outline based upon the letters and diary and then try to flesh it out so her questions could be answered.  I started this project on a manual typewriter and carbon paper, intending to write something no longer than a term paper.  However, as more questions and requests for clarification  were made, the "term paper" grew.  Editing, during this time, required an entire chapter to be retyped in order to maintain proper structure.  In early 1980, Atari came out with a game console that offered a word processor, the ability to store data on floppy disks and a dot matrix printer.  Purchasing this, I spent the next three months duplicating all the key strokes of the paper into this new computer, then finding it much easier to edit and add to the story.
The manuscript was completed in 1986 and then shopped around to various publishers and entered into contests at various colleges; the story was a finalist at Washington State University's International Literary Awards.  I finally located a publisher who was willing to take a chance on my story providing it was rewritten to a third person perspective.
Six months later, the rewrite was half complete and already exceeded the length of the original.  I began working a lot of overtime on my job and found that there wasn't any time available to continue my project - this continued for the next year.  At that point, I lost interest in the project all together - boxing everything up and moving them to the garage, where they sat for the next twenty years.
In 2009, my wife and I attended our 40th high school reunion - the school was small and we only had sixty students in the graduating class...at least two thirds of them had attended.  The last reunion attended was the 20th, and I had forgotten that I had donated two copies of my original manuscript for them to read and pass around.  So, I was quite surprised when they asked about the status of that manuscript from long ago.  When I told them them I stopped the project shortly after that last reunion, they were relentless in their efforts to get me to pick it back up.  This persistence continued for the next two or three weeks before I gave in.
The floppy disks could not be converted to Microsoft Word without spending quite a sum of money.  My daughter, Nicole, said that if I could print out everything saved, she would get it all into Word.  Six weeks later, she handed me a memory stick with both versions.
Nine months later, April 20, 2010, "Cherries" was born as an e-book on Smashwords.com and later as POD on Amazon.com and other platforms.

4. Do you gift books to readers for book reviews?
Yes.  I will gift the e-book version in exchange for reviews.

5. How did you come up with the cover? Who designed the cover of your book?
Smashwords.com offered a list of cover designers to authors to help with the cover.  I contacted the owner of DigitalDonna.com and we collaborated on a book cover design.  She is highly recommended and has exceeded the expectations of everyone I had referred to her.

6. How did you come up with the title for your book?
My original title was "The Ingenuous Soldier" which I thought was appropriate at the time, because my story is about about the innocent, scared, naive, young teenage soldiers who go to war.  One publisher, a Vietnam Veteran himself, suggested that I change the name to "Cherries", the moniker used to depict that same group of soldiers in Vietnam - The New Guy!.  The name stuck!

7. Is there anything you would change about your book? And why?
It's funny that you ask this, because every time I read the novel, I find places where I can further elaborate or change some of the wording.  After making three separate changes to my story during the last year, I was strongly encouraged to "stop" and move on.  Otherwise, there will be no end.  So now, it is what it is!

8. Do you have a book trailer? And what are your thoughts on book trailers?
Yes, I have a trailer available on my blog, U-Tube and also on my Facebook fan page.   I think it's a great way of getting the word out about your work.  However, the quality of the trailer can also be a turn off if was not well thought out and put together professionally.  It's like the movies at the theater - the trailer has to hook you and pull you in.

9. Do you prefer e-books, paperbacks, hardcovers or audiobooks?
I have book cases and cardboard boxes filled with books and always enjoyed reading them - hardcover was preferred over paperback.  However, I purchased the larger Kindle over a year ago and absolutely love it!  Now my preference has shifted to e-book above all others.  Since I travel a lot on business, I have also found the audiobooks enjoyable - especially on those long drives from one state to another.  I have recently purchased a professional microphone and am planning to record "Cherries: and have it published as an audiobook too.

11. What book are you reading at the moment? And in what format?
I am currently reading an e-book titled  "Devil's Gate" by Clive Cussler.

12. Do you have any advice for other writers? And what’s the best advice that you have been given when it comes to writing?
Only to persevere!  Don't give up...there is no other feeling in the world like holding a printed copy of a book that you wrote.

Thankyou so much for taking the time to do this interview and allowing us a glimpse into your writing world!
Posted by Rai29 at 06:00